I was about eight or nine and already felt like an awkward kid who didn’t belong anywhere. It was my friend’s birthday; one of those classic early 00’s sleepovers. We were in a tent in her backyard. In her hand, was one of those preteen magazines with a fun sleepover game. In this specific game, we had to assign each person at the party a celebrity look-alike. For most of the girls at the party, it was relatively simple. Most of them were white, so picking different, white celebrity look-alikes was easy due to the amount of popular white celebrities we knew.

But our collective understanding and exposure to celebrities lacked diversity. I remember it well. After some serious kid-debate about not knowing who my celebrity look-alike would be, we settled on Anne Hathaway for one reason — Anne and I both had dark hair. But honey, let me tell you, Anne Hathaway and I look nothing alike.

Anne Hathaway is a goddess, standing at five foot eight. She has big, brown doe-eyes, an Academy Award, and has (probably) never been mistaken for other Asian kids in her middle school P.E. class (true story).

I, on the other hand, am barely five foot two with Asian features despite my complexion being lighter than my cousins’, and have zero Oscars to my name (currently). (I’m manifesting.)

But the biggest difference between myself and the beautiful Anne Hathaway is that she’s a gorgeous brunette, white woman and I am Yonsei — a fourth generation Japanese American — who also happens to be mixed (my dad is white). And while I adore Ms. Hathaway and her career, she isn’t exactly the celebrity who should represent me in a look-alike contest.

Sure, this anecdote seems innocuous. Unfortunately, it’s a small microcosm of a bigger issue that — unless you are a part of an under-represented subgroup — you may not realize is a problem.

If you can name ten, you are either Asian or you work in Hollywood.

Now, name ten mixed actors. Of those mixed actors, which ones are mixed-Asian? Even if you named ten Asian actors earlier, you might be running into some trouble with this one. In a world where there are twelve billion white actors named Chris, you would think we could have some more Asian actors… as a treat.

Not only was I unable to see myself represented in media growing up, but my existence wasn’t validated by the world I lived in. I struggled (and still struggle) to explain my racial ambiguity and express my American-ness despite constantly being “othered.” I never had the words to explain my feelings of non-belonging. There weren’t examples of how to navigate the nuances of my identity because my TV show heroes never struggled the way I did.

The closest representation I had was in Star Trek: The Next Generation with the children of Miles O’Brien and Keiko Ishikawa. However, they were barely in the series and didn’t have Wesley Crusher-level storylines of their own.

For the majority of my formative years, the only explicitly mixed-representation I had on screen was the half-Vulcan/half-human, Star Trek: The Original Series character Spock. Spock struggles with reconciling the different cultures he was brought up in and forced to deal with this duality — where Vulcans see him as more human and humans see him as more Vulcan — a classic mixed-kid experience.

It’s strange that it’s always easier to find half-elf, half-Vulcan, or demigod examples of mixed-ancestry characters in media than it is to find half-Asian or other mixed-race character examples.

The first character that I thought represented me was Daisy Johnson or “Quake” from Agents of S.H.I.E.L.D. (2013-2020) played by fellow mixed-kid Chloe Bennet. While there are other characters that I could “claim” as mixed-Asian (like Hiro and Tadashi from Big Hero 6), they weren’t explicitly mixed. Daisy Johnson was different. Her story was the first I encountered where she was explicitly multiracial. And she was a lead character.

I finally got my representation at nineteen-years-old.

Asian roles in American TV and film are limited and often stereotyped, leading to Asian actors being cast in various ethnic Asian roles that are not their actual Asian ethnicity (i.e. Korean actors cast as ethnically Chinese, etc.). While this is not unusual, the practice becomes questionable when it reinforces the assumption that all Asian experience is monolithic and interchangeable. Limited opportunity also creates this weird phenomenon where mixed-Asian actors are cast as either full-Asian characters or characters of non-Asian ethnicities (Latinx, white, Indigenous etc.) because there isn’t a place for them.

If that weren’t enough, films will cast white actors in Asian/mixed-Asian roles without realizing there’s an issue. A recent example is when Emma Stone was cast as mixed-Chinese and Native Hawaiian in Aloha (2015). Other examples include: Mickey Rooney in Breakfast at Tiffany’s, Scarlett Johansson in Ghost in the Shell, and most of the Cloud Atlas cast.

Not knowing what it feels like to be told by Hollywood that you don’t exist is privilege.

This lack of representation taught me that I was an outcast, that I didn’t belong, and that my story wasn’t worth telling. In turn, it teaches other people that my identity is a novelty— solely there to teach main characters of “my culture” when I’ve been American my whole life.

This took a toll on my self-esteem, but it also informed the type of stories I write. While I didn’t see myself on TV, I knew my identity and experience was and is valid. Not everyone is as lucky.

When we talk about diversity and representation, we need to be analyzing exactly what those words mean. It isn’t enough to check off boxes and pretend that the bare minimum is the best we can do. Representation is important because it builds empathy and strengthens communities. One way to create better representation is to hire more Asian and mixed-Asian creators.

I’m happy to say that I’m starting to see more of my people represented in media. There’s Kyra on Alex Rider (IMDbTV) and the Shadow and Bone series on Netflix. But there’s still more work to be done. Especially after seeing the American-centered movie Minari (2020) considered a Foreign Language film by the Golden Globes because it has too much Korean dialogue to be nominated in the Best Drama category.

Representation is a complex issue with real-life consequences. With the rise in violence against Asian Americans since the start of the pandemic — in addition to the national conversation about racial inequality — a validation of Asian American identity in fiction will help promote the awareness of our struggles in reality. Our stories have every right to be told, same as everyone else. I have every right to exist. And so, does the next eight-year-old who will see herself in the stories she loves.

Caitlin Reed is an LA-based writer and self-proclaimed sweater-aficionado who prides herself in her ability to balance useless objects on her head. She enjoys writing about pop-culture and the Asian American/biracial experience. When she’s not writing, she can be found studying for Jeopardy!, on Duolingo, or down a research rabbit hole after being distracted by something... like cheese. 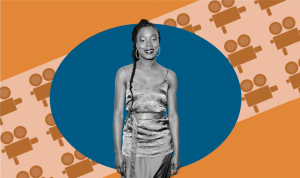